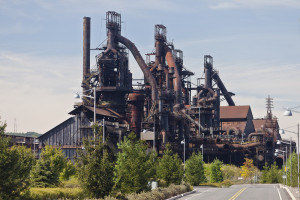 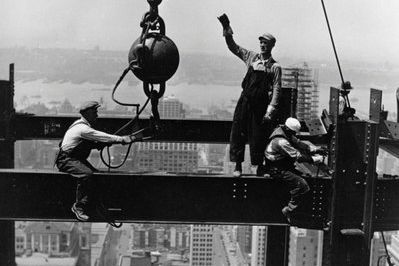 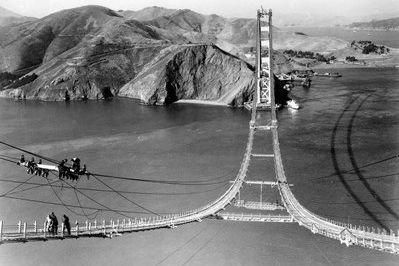 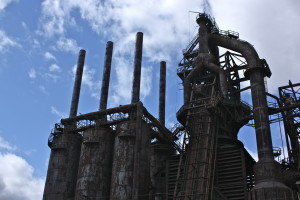 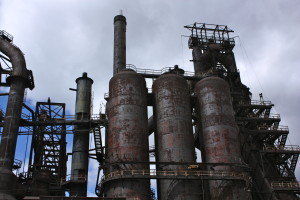 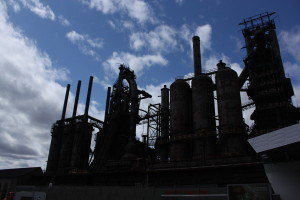 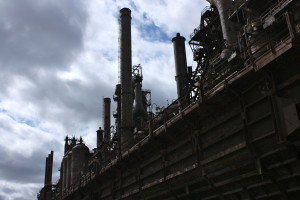 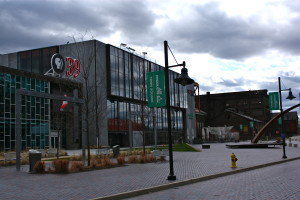 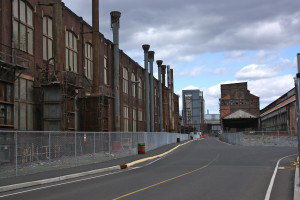 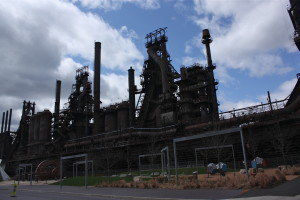 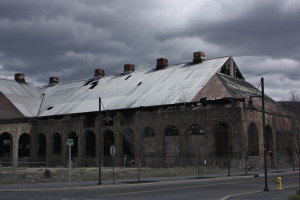 On my second week at Metcalfe I drove out to Bethlehem PA on an intern special mission. I’d heard the industrial behemoth touted as “the steel that built America,” but after polishing up on Bethlehem Steel’s history I discovered this to be less of an exaggeration than it initially sounds; Bethlehem forever changed landscapes far beyond its surroundings. In front of the visitor center there is a plaque that lists some of the major landmarks for which Bethlehem provided steel. The list is impressive, including the George Washington, Verrazano-Narrows and Golden Gate bridges as well as the Chrysler and Empire State buildings and Madison Square Garden.

I drove into south Bethlehem by way of the Hill-to-Hill bridge with the towering brown stacks rising above the Lehigh to my left. Once one of the world’s largest steel producers, the complex is gargantuan. It occupies over 3 square miles with an internal elevated rail passing through.

As an occasional urban explorer, the possibility of danger and arrest, however slim, is part of the fun of exploring old buildings. I’d be lying if I said I wasn’t somewhat disappointed that I would not be confronted with these risks in Bethlehem. These industrial relics are no longer traversable to the unsupervised visitor. Everything potentially hazardous to amateur urban explorers is fenced off at ground level, although I’m sure that with enough nerve one could find a way inside. Yet in this way a new user-experience is created; the sectioned off industrial zones are treated as artifact, sort of open-air exhibits left to develop an honest patina.

The now silent blast furnaces really are the most striking element of the campus. The sinuous lines of piping and conduit twist and coil around the furnaces and stacks creating a remarkable object. Now anchoring the development of the mixed-use campus, the iconic furnaces are fully visible from the ArtsQuest building, an arts and education non-profit, providing a spectacular backdrop from inside.

Also centrally located on the site is the Steel Stacks performance venue, an indie movie theater and PBS 39. I was glad to see this type of community created from a former industrial site. As a stepping stone for Bethlehem and a model for rust belt cities alike, a mixed-use public space with an educational and recreational component is a viable and sustainable direction for adaptive re-use.

The Bethlehem Steel complex really is the most impressive industrial remains that I’ve ever seen. Part industrial relic, part public art, the remains of the former industrial giant conjure images of a bygone manufacturing past that we now see only in sepia and black and white. In Philadelphia we’re familiar with vacant warehouses and industrial brownfields, but their size and impressiveness pale in comparison to Bethlehem steel. So while the site isn’t as wild and enticing to urban explorers as it likely was a decade or so ago, it’s still a fantastic structure to behold. Whether you catch a show, get dinner and a movie, or just come to say you saw it, Bethlehem Steel is a very cool place worth checking out.