This story was written as a test for a project MA&D is working on with First Person Arts. The project, First Person Museum, will open in early November 2010 at the Painted Bride Art Center. The museum is an experiment in establishing value.

What stories grow out of the things we possess?
How do we assign importance to the things in our lives?

Everyday objects loaned by everyday people and the stories associated with them – a simple childhood gift valued into old age, for example – will be displayed using text, photos, video, audio, and the objects themselves to tell the stories. The project team contributed stories to test the ideas and help plan the elements of the exhibit.

I can’t remember when I got my first pocketknife or who gave it to me. It was probably my father, and it had to be in the early ’60s as he died in 1965. It was also probably a Swiss Army knife. I’ve owned many over the years; a couple of Buck knives, a few no-name folding knives and several hunting knives in fancy leather sheaths. Those, in spite of their fantasy potential, always proved impractical. In the end it is the Swiss Army knife that has my undying loyalty.

I don’t have one story associated with one knife. I have almost 50 years of carrying these things around. They are part of who I am. Once, in a fit of self-reinvention, I cut my long pony tail off with a pocket knife. One Thanksgiving I carved a 22-pound turkey for our dinner with 15 people using one – as no “real” knife could be found.

Tight security around air travel makes it tough to travel with one. Once I forgot the knife in my pocket until getting into a taxi on my way to the airport. I shoved it into a convenient park flower bed. It was there when I returned four days later.

I’m pretty selective about which Swiss Army knife to own. Some are so weighted with obscure tools they threaten the pocket of the most robust pair of jeans. I prefer a simple model with a blade, scissors, corkscrew, a few other tools, and the toothpick and tweezers. Countless splinters have been pulled from many hands with the pair in my pocket right now.

It makes me happy to know my daughter carries one. 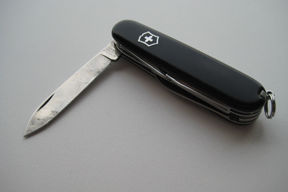 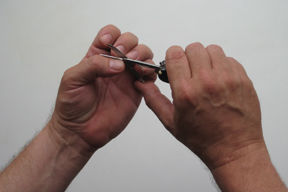